I’ve enjoyed volunteer opportunities all my life, starting with my 200 hours as a Candy Striper at the Virginia Mason Hospital in the early ’70s.    It was fun (great outfit!) and educational (sent me into law instead of nursing).    Recently I was invited to provide legal services to seniors at the Ballard Senior Center monthly clinic and I’m so happy to have this opportunity.

Some of the documented benefits of volunteering include:

I’m guessing you all have many experiences with volunteer work too.  I’d love to hear from you!

A Will is the Responsibility of Every Parent
The last thing that most people want to take into consideration when they are experiencing the joy of bringing a new child into the world is what protections they have in place if something were to happen to them.
As a new parent myself, I do not like to think that I may not be around for many years to experience my son’s growth and be there to provide some important life lessons to help him along his path. However, as a lawyer, I have seen first-hand the difficult process of when a parent dies unexpectedly without a Will.
The inherent difficulty of accepting the passing of a loved one, especially one that you rely on to such an extent, is significantly compounded when that loved one did not take the time to create a Will. A Will provides a clear framework to navigate the probate process in accordance with the wishes of the deceased person. Without such a framework, a family is left to guess at what that person would have wanted and create a plan according to those guesses. All this is necessary while dealing with increased oversight from the probate court and dealing with the grieving process. This can be overwhelming for family members trying to cope with the loss of a loved one.
A Will is important for any person, but especially so for a parent. Being a parent comes with a multitude of responsibilities and difficult decisions, and one of those is to protect your children to the best of your abilities under all circumstances, including if something were to happen to you. Do not be the person who puts this off because, although death is certain, its timing surely is not.

Give us a call to talk about your particular needs.
Matt J. Werter

Stop by and meet Meghan Limegrover, our new paralegal.

Meghan is a transplant from Texas, but with a degree in horticulture she can thrive in a new environment! She is excited to learn and expand her understanding of the law, especially in matters of personal injury.

Meghan is inspired by the variety of flora in Washington. The food, the music and the people of Seattle are just a few things she is enjoying as she makes this city her home.

After 5 years of working at Ivy Law Group, I will be leaving to start a job in the Amazon legal department. Over the past 5 years I have learned more than I could have ever imagined working here. I started my job as a former nanny knowing very little about the office environment and legal procedures.

As I look back to my first day and my overwhelming feelings of knowing nothing, I can say I have come very far from that day. I truly owe my growth in professional and legal domains to the guidance of Ruth. Ruth was not only a boss but a mentor, she helped me channel a sense of confidence and an ability to adapt to any situation thrown at me.

As I move on to a different environment with different opportunities, I can only say that I would never have been able to do this if I hadn’t got my first opportunity here. I will miss working at Ivy but am excited to start a new chapter in my life.

As the granddaughter, daughter and sister of structural engineers I grew up with earthquake preparedness stories. One of my favorites is my grandfather touring the remains of a building in Japan (circa 1920’s) and seeing that the plumbing was all that remained vertical.  The story goes that someone survived in the bathtub!

Last week we had a natural gas scare in my apartment building and I had to locate my own grab and go bag. Fortunately there was no evacuation but it was a good wake up call.  During Sunday’s less-than Super Bowl, I reviewed and replaced many items in my bag.  It was well past due!

We all get lax, but I recommend you pick a rainy, cold, February day and review your own grab and go bag!

Winter holidays are a time to be with others, and unfortunately there are many individuals that are homeless, elderly, lonely and in need.

Consider adding a small act of kindness to your holiday ‘to do’ list.

Some examples are: have a cup of tea with an elderly neighbor, call someone who lost a loved one in the past year, send a card of appreciation or compassion, give a homeless person your doggie bag, say “I love you” to someone you love.
As an attorney I’ve learned not to make promises, but this is the exception. The small act of kindness you do for someone will be repaid a thousand fold. 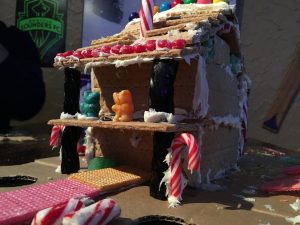 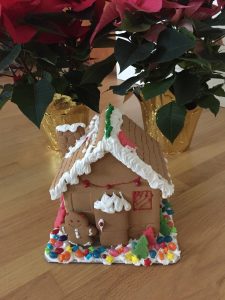 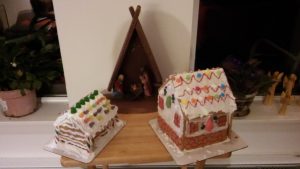 The tradition of building and decorating gingerbread houses dates back to the 16th century in Europe. We, at Ivy Law Group, have been making and eating them for 20 years! Above are some of this year’s creations. Please email us with photos of your own.

Chris Bates has moved to a law firm in Everett where he will continue his practice in family law. Martin Kreshon is joining a personal injury firm in downtown Seattle.  We wish them well.

Judy Shoji has joined our family law team. Returning to work after a stint as a stay-at-home mom, Judy brings a wealth of experience.  She has been practicing law for the past 23 years and provides representation in all aspects of family law and adoption.  Judy received her law degree from Seattle University and her undergraduate degree from the University of Washington.

Judy has extensive experience representing clients in King, Snohomish, Pierce, Kitsap, Island and Skagit Counties.  In her spare time, Judy has volunteered for the King County Bar Association Family Law Neighborhood Legal Clinic from 2006-2014 and for the Self Help Plus Clinic since 2014. Judy was named King County Bar Association Volunteer of the month in October 2014.  In her free time, Judy likes to cook, hike, and travel to Hawaii as often as possible!

In the beginning of the creation of the United States of America you had to be a white male, over 21 and a property owner in order to vote!

240 years later it is all genders, all races and all economic levels who may vote.

The right to vote doesn’t mean much if it isn’t exercised. Flexing our individual muscles are what extended voting rights to all of us.   The people who extended those rights were white male property owners who (eventually) voted for inclusion.

In the 2012 presidential election only 57.5% of Americans voted and that was a high turnout! Our vote is important. Whether you vote or not, someone will be elected president. And that person will be your president, making decisions that affect you and this country for many years to come.

The presidential portion is not the only important aspect on the voter’s ballot. Many issues that affect day to day life are determined on a local level such as taxes and education.

Ballots are out there. Now let’s all exercise!